In this blog post I will talk about the reason your flashlight has so many colored LED options, and what situation each color is useful for.

If your flashlight is going to have any extra colored LEDs, it is most likely going to be red. This color is useful for a couple reasons. Firstly, red is the universal color signal for caution. It also works well as an attention-getting color if you need to get help. Red LEDs also help to preserve your night vision. In a situation where your eyes are adjusted to darker surroundings the red LED will require less light adjustment than a white LED. This difference in color between white and red will help illuminate your surroundings while allowing your eyes to continue to see more clearly outside of the flashlight’s beam area. Green LEDs are useful for hunters and fishers when they are outdoors. Fish, deer, and other animals have a harder time seeing green light than white or other colored lights. This advantage allows people who are in nature to illuminate their surroundings with a reduced risk of alerting nearby animals to their presence. Green LEDs also tend to have longer run times than other color LEDs which can be useful in a survival situation where saving battery power is important.

Blue LEDs are great for multiple applications ranging from nighttime map reading to easily identifying bodily fluids. They are often used for reading maps in dark conditions because they do not blend out the red colored lines on maps. Law enforcement and hunters use this light color because the LED illuminates blood and other bodily fluids. Blue LEDs accomplish this better than a red or white LED, but not as well as UV, which we will look at in a moment. Blue lights are also useful for low visibility situations because they cut through fog more effectively than other LEDs.

Infrared lights are used for seeing at night. The infrared beam will illuminate a relatively short distance ahead of the wearer in most situations, and is great for remaining undetected as it is invisible to the naked eye. The green color that you see through most night vision goggles is due to the fact that the human eye is more sensitive to green light. When images are converted through night vision goggles they appear in black and white, but a green filter is applied because human eyes can look at green for a longer amount of time. (This is one of the reasons that many early computer screens used green text.) The combination of the two is common and leads to the best visual results at night, here is an informative thread with pictures of the differences.

Ultraviolet lights are common and can be used for a variety of applications. One of the most common uses is the ability to authenticate IDs, money, and any official document that uses a UV-sensitive watermark. Ultraviolet lights are even better than blue LEDs at identifying blood and other bodily fluids, making them a favorite of law enforcement and crime scene investigation workers. In an odd but potentially life-saving usage, UV lights can be indispensable if you live in a climate where you need to watch out for scorpions. Believe it or not, scorpions’ shells react brightly under UV light, making a UV LED a piece of helpful safety equipment. UV lights are also good for quickly recharging watch faces, compass needles, or other glow-in-the-dark items when the sun is down.

Hopefully the information on the different LED colors and their individual uses can inform your next flashlight purchase, or introduce the potential you didn’t know your current flashlight possessed. And as always we have a large selection of LED flashlights at Battery Junction, so come by with your newfound knowledge and see what products we have to offer. 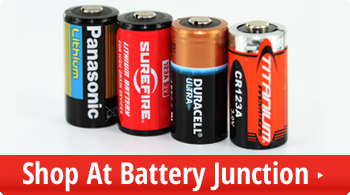